Journey through the Space between Time

Following The Great Transition blog entry came directives for a new illumination. I was to look for a maze in the form of a Vesica Pisces – the () intersection of two circles. In my search an additional maze turned up that was also to be used. That second form is called a Baltic Wheel. Here are what each looks like:

As you can see, the Baltic Wheel functions here as cross-section through the center of the entry spirals of the Vesica maze –  an entry and exit point.

The arrangement indicated was the Vesica maze in the center and a Baltic Wheel on either side. The left side wheel was to have the entry point facing up, the right side wheel's entry point was to face down.

Two figures needed to be added to this arrangement, both in fetal position. The expiring figure is over-ripe: 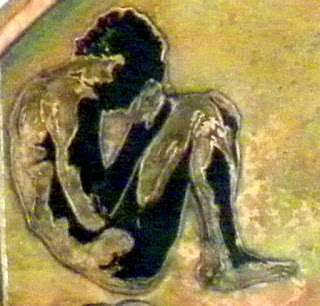 the counter figure, not yet individuated, but moving towards birth: 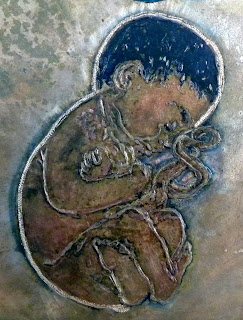 I was also given the arched framework that was to hold this coded arrangement, creating large areas of empty space.

As you can see from this image of the final version, there are two additional elements that have been added.  The story of the light lines ascending and descending from the Baltic Wheels comes in the continuation below.

On Thanksgiving I had two artist friends come over for a potluck. One noticed Matrix when she walked in and walked over to it. As if compelled, she proceeded to give an all inclusive de-constructive critique of one element after another of piece as it was, though she had a hard time articulating what exactly didn't work. The other artist then walked over to it and began a giddy proclamation: “Where's the pregnant woman? Where's the teenager? Where's the old (I can't remember if it was man or woman)…?” Perhaps one would call this re-constructive criticism? It was all so curious coming from these two who heretofore have expressed nothing but love & support my work. I was all the more amazed since I had not solicited any input. Despite my astonished amusement, I understood from the spontaneous, well-intentioned abuse, that there was likely something missing in the work's symbolic code that kept it from being intelligible, that is to say, resonant with what is known within the human cellular experience. So that night I brought Matrix into my bedroom in hopes of receiving some additional instructions.

I had a dream.

I was wandering the streets seeing if I could find somebody who could tell me what I would find if I were to go through the maze and come out the other end. I saw a library and went in. The librarian was a leanish man with glasses who sat me down at a table and wanted to engage with relish in a debate about the validity or invalidity of belief in reincarnation. I felt annoyed with this guy who was on some intellectual trip and left to go back outside in search of someone who could show me what it was like to come through and out of the maze. I then came upon an old woman whom I seemed to know. She was pretty no-nonsense. She told me to follow her and she would show me what I was looking for. We came to a field and I remember us rolling on what felt like a soft grass. I kept my eyes closed. We kept rolling and rolling until I felt the feeling of “arrival”. I opened my eyes and found myself facing a wall in a kind of anteroom with two openings – one behind me from which I had just come and one to the left which was apparently an entrance to another place (an exit from the maze). My first impression was that the space seemed dark – not dark dark, but a room which had no windows and no particular light source, though I could see just fine. There was light coming from the entrance behind me – bright sunlight, as it were. The exit seemed to be to an internal place that didn't have it's own source of light, but did have some form of reflected light that was less intense. The shape of the room was like this:

I turned back to find the old woman who was ready to move on. I pulled out a calendar to see when we could meet again. The calendar page was blank but was full of small empty squares, except for one square that contained the number “5” about two or three columns from the left in and several rows down. The moment I looked at that 5 I knew it was the day she was going to die.

The only other part of the dream that sticks with me is that I looked down at her left knee, which was a kind of a colorless transparent white. Though I saw no bruising, I knew it had suffered some injury, probably from all that rolling. I remember wondering what I should do about it, if I should be concerned about her injury. I was also thinking that I should thank her for showing me the way. Neither seemed appropriate at the time.

I have pondered the meaning of “knee”. I woke up feeling the word to be significant. Upon waking I couldn't think of anything that might signify. After some consideration I transliterated “knee” into Hebrew - Nun Yud – equivalent to the number 60 in gematria. Sixty is the number where things begin to transmute or take a quantum leap from plane to plane. Sleep is 1/60 of death; a dream is 1/60 of prophecy... 60 is also associated with the Priestly Blessing and the transcendent light of Havaya.

I awoke shortly after the dream and looked at Matrix sitting on the floor by the bookshelf in my bedroom, wondering what alterations I needed to make in order to incorporate the dream teachings. I saw where a single line on each side could create the number 5 symbolic language of the anteroom. 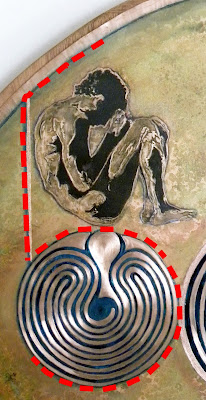 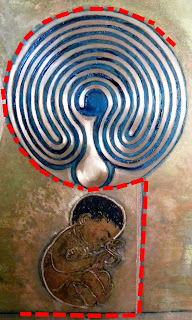 Ultimately, the entire figure takes on this double 5 formation if viewed from a depth dimension where the space between the junction of the 5's is the saturation space of the Vesica Pisces: 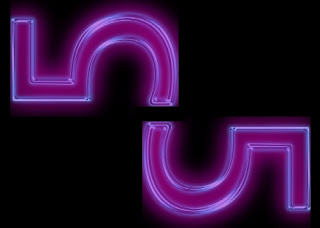