Telling of the Bees 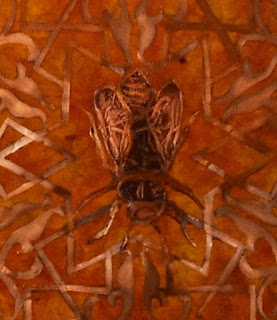 In medieval Europe, bees were considered to have a special intelligence regarding the mysterious unfolding of the universe.  They were revered as messengers between the Divine realm and our own.  Celtic mythology has held that since bees were the link between our world and the spirit world, if you wanted anyone to stay informed who had passed over, you could tell the bees and they would pass along the information.  To this day there are bee keepers who still practice the old Celtic custom of "Telling the Bees".  Important events are told to the bees such as marriages, births and deaths.

In Telling of the Bees, the other side of that equation is represented.  Here a confluence is taking place between 5 angels and a bee regarding life on Earth. 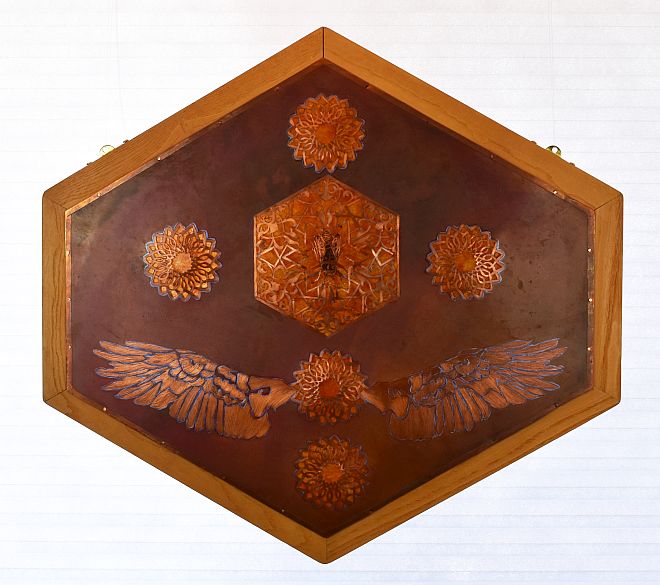 It is the bee who appears to be relating something of significance about the comings and goings, the doings and happenings of the earthly realm to five angelic forces.

Surely a bee can report on many issues regarding water, soil, seasons, winds, weather and relationships of balance and imbalance.

Whatever is being reported is clearly something of consequence since one of the angels is assigned to take action.

It has been some time since I was first instructed to create this copperwork illumination.  Before discovering the practice of "Telling the Bees", I had referred to it as Flight for Life, A Love Song, as it feels potentially benevolent.

Having assigned it a new name, I felt it time to try, once again, to capture its essence in a photograph. Up until now, this illumination has eluded my arduous photographic efforts.  The wing on the right side (from our perspective) was always disappearing when shot from a full frontal position.  As you can see, even now that I have a newfangled camera and a very cool set up to take images which can illuminate both the back as well as the front, that wing is still elusive - albeit almost capturable.  What is the mystery of that ephemeral wing?

Let me know what you think.